Weekend in the Waterberg with Annie, Steward and David. Finding out on Thursday all accommodation is fully booked in Vaalwater. As there was a Festival at the primary school in town. So I began looking for camp sites. Finding where I normally camp at Bosveldrus had changed owners and no longer has camping. After phoning around I found camping at Vaalwater river oord. Then had to let my fellow riders know that the plan had changed. Now they needed to take kit with for camping. That turned this into a real hard core adventure for two days. Fortunately they had kit for bike packing. However this made their ride heavier and would give them more of a work out. After all it was for training.

They arrived at my house about 6H30 on Saturday. After putting all the bikes together and strapping on all the gear we left at around 7H00. Traveling with gear put more strain on attempting to ride 140 km on rough dirt roads.

After about 15 km the road turned into wash board and stones. Have to admit I knew it was like this. I made an adjustment to my frame bag the night before as it was wearing out after the last year of extreme trips. However the modification did not work. The rough road shook the Velcro undone. Then to top it off the GPS came off and I had to ride back to find it in the road. This is the first time the GPS has ever come off. I must have bumped it when fixing the frame bag back on the bike. We crossed other roads more bumpy than this stretch and it did not come off again.

Hit a luck as we found the farm store open just as we came off the Jasper road on to the old Naboomspruit – nylstroom road. Here they had some fresh vet koek that we slipped into our bags for lunch.  Then we started the pass up to the top of the Waterberg plateau. I seem to remember that it was a lot steeper. After going up to Pigs Peak or Monteng pass this was like going down a flat road. Having said this the heart rate lets you know you are working. Loos stones let the wheels spin out a little. So have to put some weight onto the back wheel to stop it slipping in the stones and gravel.

Just to make things interesting all three of our GPS did not tell use to turn left. We landed up having to ride back a few Km and took the second left which added about 10 km to day trip. 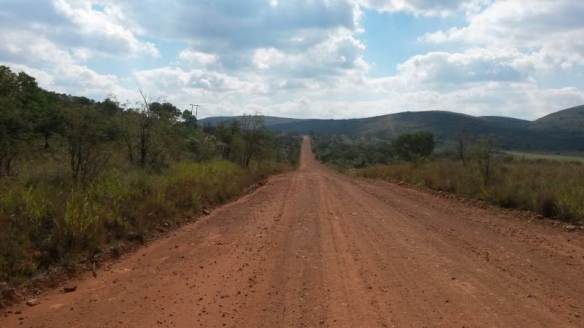 At this point it was clear that I was riding with some strong riders. There legs were like pistons with no wobbles and regular strong pace. They know what their bodies are asking for. Something to eat at the right time and water as a good backbone to rehydration. With an eye for enjoying the outdoors.

The whole aim of this out ride was to train for the ride to Rhodes. After 70 km Annie’s back was paining from a previous injury. At this point we found a water tank on a farm and filled water bottles from a hose pipe at a cattle drinking trough. I had drunk about three litres out of my 4 litres of water and all the others water was also very low.  Annie called it in and Steward turned back with her to Nylstroom to get picked up by a person from the farm.  So Annie and Steward did about 100 km for the day. David and I pushed on to 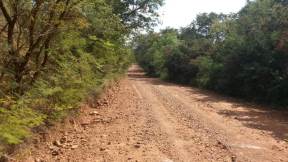 Vaalwater on the Melkriveir road coming out at Vrymansrus turning just before Vaalwater. In my view this was the most scenic part of day ones ride. We did 154 km for the day. Lots of sand, stones and climbs. We arrived in Vaalwater as the last light was disappearing from the horizon.

Stopping at a Shop at garage to get a few supplies and rode out of town to the Vaalwater river oord. This is just a few km on the other side of town. They have a few rooms, with a small bar and restaurant with a limited menu. David and I landed up eating steak egg and chips. By this time the temperature started to drop and warm clothes needed to be put on. As we went out to find the camp site Annie and Steward arrived in their car. So off we went and pitched tents. My bike and tent left and David slept in tent right.

Steward and Annie decided to sleep in back of SUV. 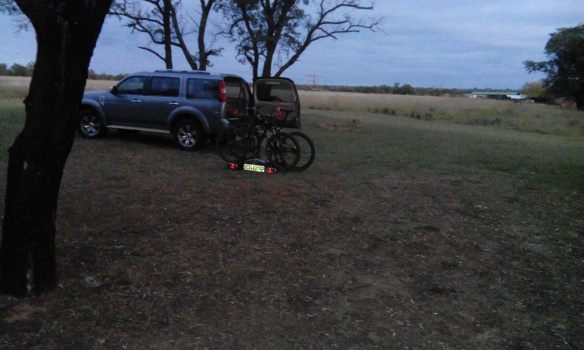 Must say it was very nice to have a warm shower.

To slip into a sleeping bag was very comforting on this cool night. I wanted to travel light but chose not to as the weather forecast was for the arrival of a cold front. Thank goodness I listened to the weather report.

Rising after 6am we rode out at 8am. This time it was Steward, David and I. We rode out to Alma along the dirt road that I had previously vowed never to ride again. Lucky it was in reverse. Gentle downhill helped us over the washboard and deep sand. 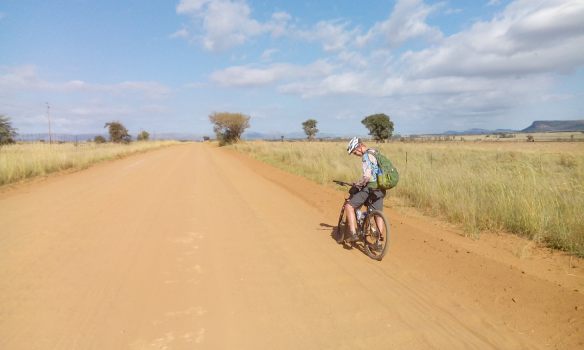 If you wish to see how hard a vehicles suspension works this is the road to ride and feel it. You can also watch the passing vehicles wheels bouncing up and down. Stopping at Alma shop we shared a Coke.

And headed towards Nylstroom taking the second road right. This led us to a network of roads that I had not ridden before. Must say the road surface was little better here as there is less vehicles using these roads. Seemed that we were just going up and up never getting down hills. Having said this there are some beautiful hills and farms. Very nice to take a step aside from the main roads.

Finally we found the down hills and began the decant towards Tabo Monate. Then it was my turn to get a puncture. Thought it was from some of the rock ridges down the steep decants. However it was on the side of the rim. Think there was some spokes that must have moved from the strain we were putting our bike through on these rough roads and fast decants. Just as we started ascending out of Vaalwater earlier in the morning Steward had a puncture on the paved road. He also had one on the first day. It was like chocolates to get these nice down hills. We came to the conclusion it needs to be ridden in reverse to train or punish a new comer to long off roads.

Out of the dirt we slipped down the hill on paved roads stopping at Rocking horse nursery for water refills. With 40 km to get home before the sun set. Passed over the N1 highway and back side of the Kranskop one stop garage. Finding all of us little worn out we opted to take the paved road short cut and finished on the last 10 km dirt road down to the farm.

For my first group ride this was amazing. Felt like Christmas. Need to gather some like minded people together again and do a few loops of the Waterberg roads again. Also Annie decided her back was not ready for Race to Rhodes. Steward and David’s tender parts were tender, giving them a little better preparations for the race. Once the rash and red marks are gone on their butts, they will find less pain on the race. Good luck to them and hope they enjoy the race. David and I did 297 km in two days and the race is 500 km with portage. So think they will be able to finish well within 5 days.

2 thoughts on “Training weekend in Waterburg”